At the recently-concluded triple Conference of the Parties (COPs) held on June 6 to 17, governments decided that transboundary movements of “All Electrical and Electronic Wastes” described in Annex II of the Basel Convention as “Y49” non-hazardous wastes and in Annex VIII as “A1181” hazardous wastes will be controlled by the Convention under the prior informed consent (PIC) process from January 1 2025. 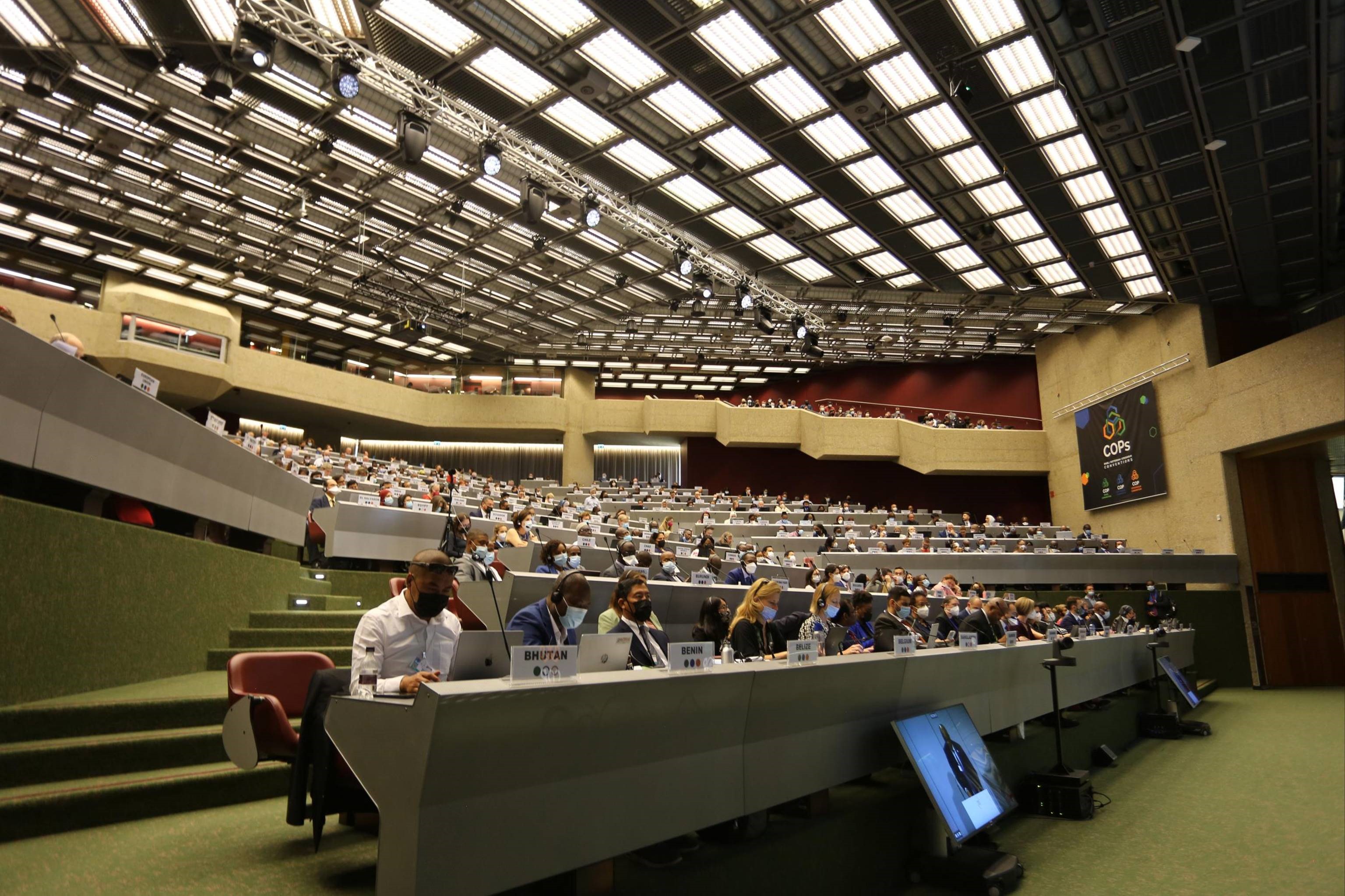 View of the plenary.

BIR was represented throughout the fifteenth meeting of the Basel Convention COP, the tenth meeting of the Rotterdam Convention COP and the tenth meeting of the Stockholm Convention COP by Ross Bartley, BIR’s Trade & Environment Director. Alev Somer, BIR’s Deputy Director of Trade & Environment, also represented BIR during the second week of the COPs. BIR-affiliated association representatives, notably the US Institute of Scrap Recycling Industries’ Fred Fischer and the European Recycling Industries’ Confederation’s Julia Blees, as well as a number of companies, attended key parts of the COPs. This two-week, face-to-face meeting continued and built upon the virtual meeting held in 2021.

The Legal Contact Group discussed in detail the proposal by Ghana and Switzerland to amend Annexes II, VIII and IX so that all-in transboundary movements of all electrical and electronic wastes, both hazardous and non-hazardous, are controlled by the Basel Convention through the PIC process. BIR explained to this group how spare parts may be harvested from e-wastes for reuse and how electronic chips from circuit boards may be separated and sold. Mr Bartley also suggested examples of the processes to separate materials from e-wastes.

The reporters from “Earth Negotiations Bulletin” put it the following way:

“’When is a component of a component still a component?’ was the question posed to negotiators considering e-waste. It reflects the complexity of the task of how to list these multi-component wastes in the context of the Basel Convention mechanisms. A circuit board is e-waste that contains plastic, metals and other materials; some are hazardous and others are not, while some are listed elsewhere in the Basel Convention. The Convention’s creators perhaps did not foresee global trade in such wastes when they designed the Annexes. It’s a near-surgical task, creating listings broad enough to address the fast-growing and evolving nature of e-waste, while providing clarity on what is included, without creating gaps or loopholes.”

See attached UNEP/CHW.15/CRP.29 noting that this draft text is to be confirmed.

Annex IV amendments did not progress as some questioned the proposed “preparation for reuse” addition that may expand the definition of waste under the Basel Convention, and others did not support the inclusion of “catch-all operations”. The Open-ended Working Group will discuss the EU proposals as well as the Expert Working Group’s recommendations and findings, together with a list of issues as examples to consider.

From June 8-10 2022, and with the support of the Plastic Waste Partnership co-chaired by Ole Thomas Thommesen of the Government of Norway and Mr Bartley of BIR, the triple COPs held a Plastics Forum with a wave of events aimed at raising awareness and exploring options to try to stem the tide of plastic pollution.

A deadline of August 15 2022 has been set for nominations to the Expert Working Group to update the “Technical guidelines on transboundary movements of electrical and electronic waste and used electrical and electronic equipment, in particular regarding the distinction between waste and non-waste under the Basel Convention”, inter alia taking account the new Y49 and A1181 e-waste entries and the PIC controls.

The COP decided to continue co-operation with the World Customs Organization (WCO) on a harmonized commodity description and coding system. New customs codes specifically for Basel Convention wastes have been in force since the beginning of 2022, allowing for the identification of “electrical and electronic assemblies” (B1110 and A1180) and “waste lead-acid batteries, whole or crushed” (A1169), the latter being included as a subheading under “electrical and electronic waste and scrap”. During the COP, the WCO called for greater collaboration between environmental and customs authorities to help identify new trends, to disrupt organized crime groups and to collect data. 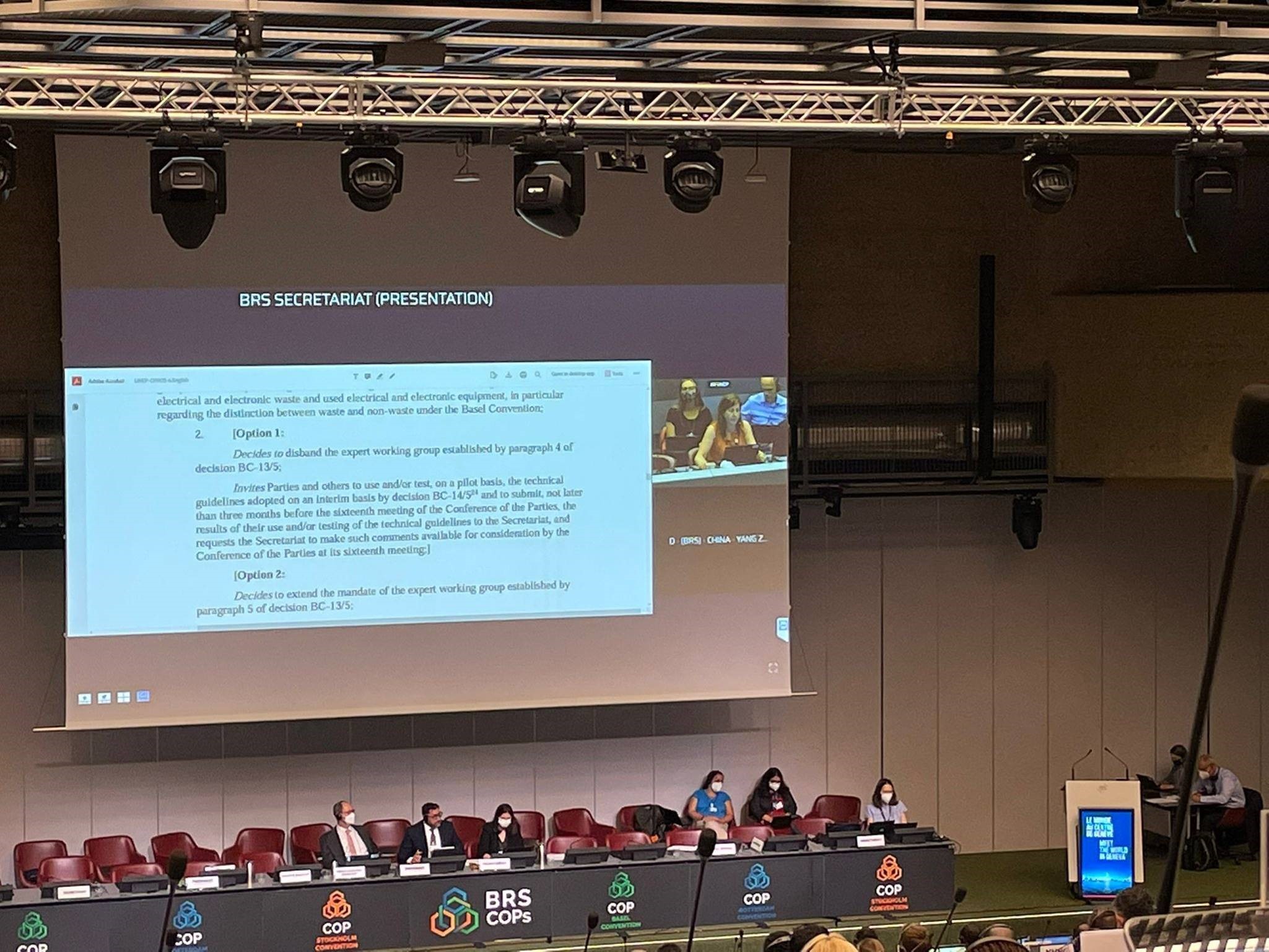 Drafting in the Contact Group of the Decision on the eWaste Technical Guidelines in real-time, with a draft decision confirmed later in the plenary.

The extraordinarily inefficient PIC control procedure has been a source of great concern to industry over the last 30 years as it commonly takes far too long for countries’ Competent Authorities to agree to transboundary movements (or shipments of wastes); indeed, the set timetable for processing requests to export/import wastes has not changed since the pre-internet age of registered post.

The Russian Federation put forward a proposal to speed up the decision-making but, for legal reasons, this was not agreed. Disappointingly, a number of countries (including Algeria, Benin, Côte d’Ivoire, Dominican Republic, El Salvador, Gambia, Morocco, Nicaragua, Panama and Thailand) expressed a desire to lengthen the time they had to agree to exports/imports of wastes. The outcome of discussions on this inefficient control procedure is that the COP invited inter alia trade associations and companies to “submit to the Secretariat, by November 30 2022, information on challenges in the implementation of the prior informed consent procedure and on best practices, possible approaches, initiatives and views to improve the functioning of the procedure”. BIR strongly advises companies to work through their trade associations to respond to this request.

Also worthy of note is that countries can opt out of new waste listings within one year of the communication by the depository. For those countries, amendments would not enter into force.

The Basel, Stockholm and Rotterdam Convention COPs were preceded by a high-level segment on June 1 2022 during which ministers from around the world discussed how implementing these three Conventions on hazardous chemicals and wastes can help address the triple planetary crisis of pollution, climate change and biodiversity loss.

The Open-ended Working Group (OEWG-13) to discuss technical issues, such as the guidelines for plastic wastes, waste lead-acid batteries, e-wastes and legal issues, such as the review of the Basel Convention’s Annex IV, will take place for a duration of three days during the week commencing February 20 2023 while the sixteenth COP is set for May 8-19 2023. The first meeting of the Intergovernmental Negotiating Committee to develop an international, legally-binding instrument on plastic pollution is tentatively scheduled to meet in Uruguay in November this year.