BIR World Recycling Convention - E-Scrap Committee: Challenges and opportunities for recyclers in “the interesting times ahead of us” 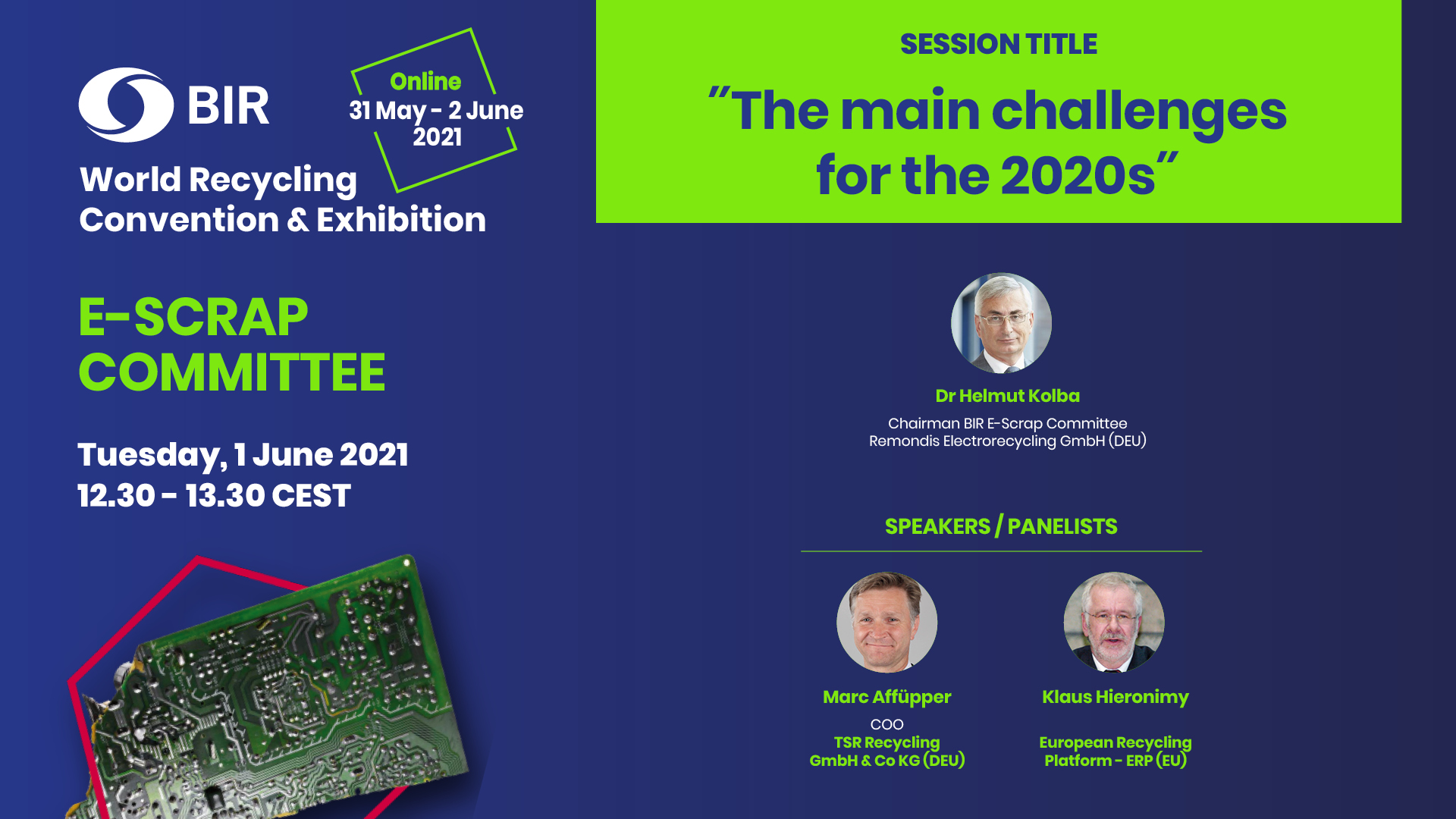 Electronics recycling was in “a very complex environment” in which there was “an absolute need for a dramatic change”, commented Helmut Kolba of Germany-based Remondis Electrorecycling GmbH in hosting his first meeting of BIR’s E-Scrap Committee since becoming its Chairman.

The likely scale of that change was conveyed by the two guest speakers who addressed today’s online meeting.

The European Green Deal promised to disrupt existing business models for electronics by creating an extended circular economy built around repair, reuse and remanufacturing, according to Klaus Hieronymi, consultant for HP in the framework of the European Recycling Platform. In addition to recycling at end of life, therefore, the objective was to “have many more circles beforehand to extend the usage time of the product”. The carbon footprint for remanufacturing a laptop, he noted by way of example, was only a quarter of that for a new product.

Such a revolution would create “much stronger demand for recycled materials” as well as a corresponding requirement for suppliers to certify recycled contents across all material streams. Furthermore, the changes would encourage manufacturers “to keep their arms around their products” through buy-back and sourcing of parts. Harvesting of spare parts therefore represented a “big opportunity” for the recycling sector, according to Mr Hieronymi.

Marc Affüpper, COO of Germany-based TSR Recycling GmbH & Co. KG, acknowledged that there were “interesting times ahead of us”. He envisaged closer co-operation over the certification of “green raw materials” as well as “the need to grow efforts to close loops for the entire material spectrum”. Recycling processes would need to become “more sophisticated” given that, for example, the plastics mix had increased its average share of small domestic appliances from under 20% in 2013 to nearer 30% in 2020; over the same seven-year period, average metal content had dropped from approaching 45% to around 30%.

On the issue of legislation governing electronics recycling, Mr Affüpper called for “more global synchronization to get closer to a level playing field” as well as the stricter enforcement of existing regulations. He also identified the need for a holistic view of changing waste streams and for an understanding of shifting consumer habits, including the fact that electronics were being discarded significantly more quickly than even a decade ago.