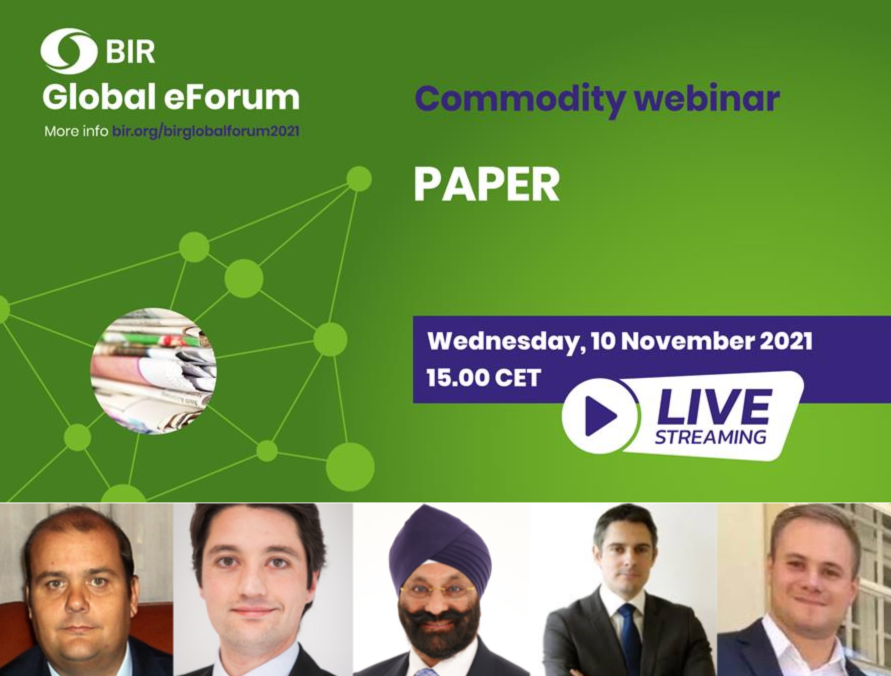 Debate at the latest BIR Paper Division webinar on November 10 was dominated by an issue of paramount importance to recyclers of all commodities, namely disruption to global logistics.

The event also brought the announcement that, after four years as divisional President, Jean-Luc Petithuguenin of France-based Paprec has been succeeded in the post by Francisco Donoso of ALBA Servicios Verdes in Spain. Having thanked his predecessor for his efforts on behalf of the sector, Mr Donoso underlined the importance of adapting and improving to meet new challenges.

Guest speaker Florent Noblet, who is Deputy Managing Director at French transport and logistics trade body Union TLF as well as Managing Director TLF Overseas, characterized the period since the onset of COVID as one of shipping delays, blank sailings, roll-overs, port congestion and surging freight rates. Against this “completely unprecedented” backdrop, customers “are suffering from a very poor quality of service from the ocean carriers”, he remarked.

Major ocean carriers have faced problems over a number of years with overcapacity, high levels of debt and a lack of operational profitability. Thus, when COVID began to impact global trade in the first half of 2020, vessels were scrapped or discarded in a bid to adjust capacities, but subsequent renewed growth in shipping demand has caused “total disruption in the maritime supply chain”. And Mr Noblet added: “We have to face the fact that this situation will last at least until the end of next year and maybe the most part of 2023.”

The nine leading ocean carriers account for an estimated 98% of the global sea freight market and have significant political power on their side - particularly within Europe, contended Mr Noblet. In the USA, meanwhile, the government has looked to be “more proactive”, such as through an audit of carriers in a bid to prevent any demurrage/detention cost and surcharge abuses.

In response to the guest presentation, BIR Past President and former Paper Division President Ranjit Singh Baxi said that freight rates soared more than 300% between September 2019 and October 2021. He called for the formation of a Global Shippers Alliance so as better to defend the interests of customers like the recycling industry. “At the moment, we shippers haven’t got a voice,” he complained.

Mr Noblet confirmed that his own organization is looking to highlight the difficulties encountered by customers through its lobbying at the national and EU level. “We say to the public authorities that the situation cannot continue - especially for small and medium-sized shippers, some of whom cannot already afford to pay US$ 16,000 or US$ 18,000 per container,” he told the panel discussion moderated by Mr Donoso and also by Sébastien Ricard of Paprec.