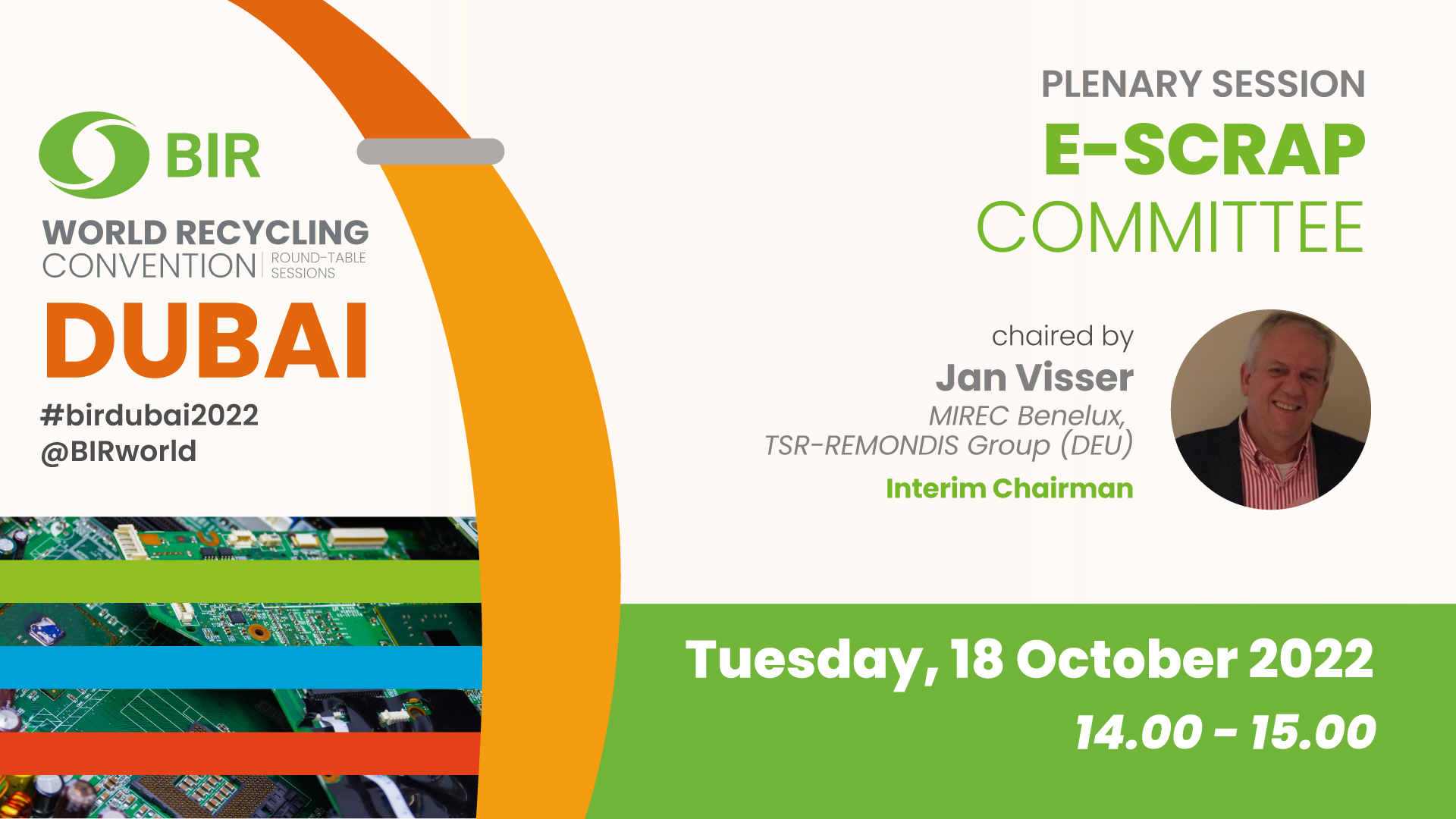 The addition of plastic to the Basel Convention’s Prior Informed Consent (PIC) procedures has prompted calls for a review of the way the Convention is structured, its effectiveness and future direction, BIR’s E-Scrap Committee heard at its Dubai World Recycling Convention on 18 October.

In his presentation on the US perspective on PIC, Fred Fischer, Assistant Vice President International Trade, Institute of Scrap Recycling Industries (ISRI) told attendees: “Basel has been something of a sleepy subject – until now.” In June, it was agreed that future country-to-country shipments of e-scrap from 2025 would have a notification and certification system similar to that introduced for plastic in 2021. The US is not a party to the Convention but participates as an observer, Mr Fischer explained, limiting the ability of US exporters to trade with non-OECD countries.

In the Q&A which followed, ISRI President Robin Wiener said the US Government was considering ratifying the Convention. “There are advantages in the ability to influence [by being in it] but there are significant concerns about how it is structured and the way it is going.” She thanked BIR for “its work on the Convention over the years”.

Mr Fischer said it was difficult to quantify the value of e-scrap trade subject to Basel controls but ISRI estimates a figure of US$ 23bn for 2021, including around US$ 7bn of OECD exports to non-OECD countries. He expressed concern that electrical or electronic equipment was being defined as “waste” and that that included components, sub-assemblies and consumables that are part of the principal equipment. “Product lists and specific definitions of included products are undergoing discussion in technical and legal expert working groups,” he pointed out. “Work is ongoing to determine whether all or only certain categories of goods and ‘fractions’ should be included under the controls of the Convention.” Mr Fischer called PIC a cumbersome procedure which involved large amounts of paperwork requiring prior approval for shipments in all transit countries. “This really has a dampening effect on potential trade. A lot of companies are deciding whether or not to bother with this because it will be so disruptive. Most people would like to see reform. “With Basel, everything is waste until it is not. It misrepresents it: scrap has value.”

ISRI is also concerned about possible changes to used equipment destined for repair, refurbishment, or reuse which is not currently considered as “waste” under the Convention if it meets certain assurance, handling and documentation requirements. The EU has proposed an amendment which ISRI says would allow countries to apply import and export controls on shipments of all types of used goods destined for repair and refurbishment, not just plastics or electronics. “The US Government and most industry associations oppose the EU proposal. Given the EU’s outsized influence among Basel Convention Parties - and the US status as a non-Party with an inability to substantively influence the discussion and outcome – it means this amendment has a high likelihood of being adopted.”

Another ISRI criticism is that, while the Basel Convention is both an environmental and trade agreement, it is mainly led by environmentalists. “International trade experts and customs officials should be more involved in the negotiations to help improve the effectiveness of the agreement,” Mr Fischer argued. Nor, he maintained, had there been any fundamental review of the impact of the Convention over the years. “They have added electronic products with very little discussion or thought about what they are doing will be effective. We want environmental stewardship of the earth and responsible businesses but there needs to be facts and we’d like to see more of that.”

Committee Chairman Jan Visser, Mirec Benelux/TSR Recycling GMBH and Co. KG, of Germany, spoke personally about the growing risk of fires started by batteries. He said his company had had a big fire in 2018 and it had now cooperated in making a special video on fire risk and fire prevention.  Using real-life examples, the high-quality film shows how easy it is for a fire to start, even in lorries during transportation when no handling is involved. It also explains how changes to the design of recycling facilities and smarter detection technology can lessen the impact of a fire when it breaks out. After the video, Dr Visser said recyclers could meet the challenge by controlling risk at the collection stage, disassembling batteries from equipment, and with stricter inspection and recording of the disposal.

The session also included a presentation on the reuse of electrical and electronic equipment by Stavros Mylonas Managing Director, SafeIMS Dubai who set out the approach, systems and procedures necessary for reuse as an effective business proposition. He said recyclers had nothing to fear from greater reuse, arguing it was a complementary activity rather than competitive, and offered extra revenue streams to recyclers.