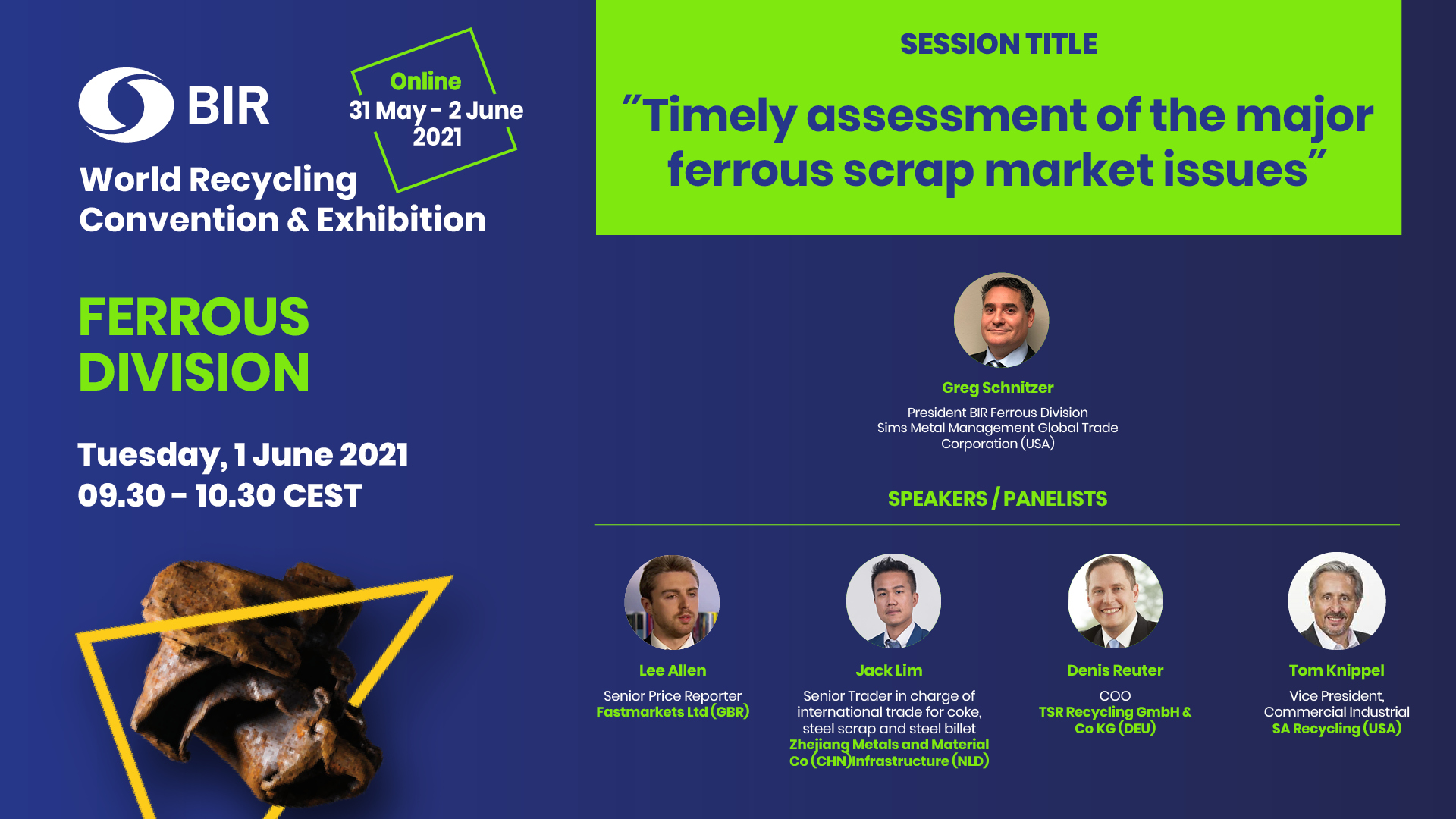 Objectives enshrined in China’s 14th Five-Year Plan include cutting domestic crude steel production capacity and boosting the use of scrap-intensive electric arc furnaces over the more traditional blast furnace route. China’s policy shift implies “reducing its reliance on iron ore and increasing its consumption of imports such as scrap and steel billets”, observed Lee Allen, Senior Price Reporter at Fastmarkets, in his guest presentation to the latest online meeting of the BIR Ferrous Division on June 1.

Mr Allen pointed to forecasts that China’s steel scrap demand could jump a further 20 million tonnes in 2021 and that some experts suggest its annual imports could soar to the level of around 10 million tonnes last seen a decade ago, despite Fastmarkets’ belief that the country’s crude steel production would peak as early as 2022.

Japan had exported 31,496 tonnes of steel scrap to China in March 2021 alone - equivalent to more than 65% of total imports, according to Mr Allen. One of the attractions, he explained, was that Japan was able to supply sought-after plate and structural (P&S) scrap in relatively small tonnages suitable for trial cargoes.

A relatively short sailing time was another reason why Japan, and also South Korea, had emerged as leading suppliers to the Chinese market, explained Jiak Lim, Senior Trader at Singapore-based Zhejiang Metals and Materials. The choice of Japan was also influenced by the fact that many of its large companies had established offices in China. He advised prospective exporters to China to focus initially on P&S and shredded scrap in 20-foot containers for ease of conforming with the country’s import specification requirements.

Having noted that Asia’s steel scrap import prices had “almost doubled” in one year while steel billet values had risen “even more sharply”, the focus of Mr Allen’s dissection of latest market trends turned to the “very profitable environment for the steel mills in Turkey”. By mid-May, the average rebar export/scrap import spread had “sky-rocketed” to US$ 247 per tonne from around US$ 148 a year earlier, while the average for the last four years had been US$ 182. However, researchers at Fastmarkets expected this spread to retreat to US$ 168 per tonne by December this year.

In response to a question from the BIR Ferrous Division’s President Gregory Schnitzer of Sims Metal Management, Mr Allen predicted that steel prices would edge lower in the coming months and that there was “greater downside for steel than for steel scrap” during rhe remainder of 2021. On this subject, Tom Knippel of SA Recycling in the USA pointed to a previously unseen “decoupling” of new steel and scrap prices, adding that the former were “not sustainable in the long term”.

Mr Knippel and Denis Reuter of TSR Recycling GmbH & Co. KG in Germany agreed that the USA and Europe were witnessing a significantly lower generation of prime scrap, partly as a result of production issues in the automotive sector. Mr Reuter also acknowledged concerns over proposed changes to EU shipment regulations that would potentially limit exports of materials designated as “waste” only to those facilities which operated in broad accordance with the health and environmental standards established in EU law. He insisted: “I do not think it will be realistic that we will see a total ban on exports from the EU.”

The root of the problem, argued Mr Schnitzer, was that steel scrap fell under the “waste” definition in Europe when in fact it deserved proper credit for being a “recycled raw material”.